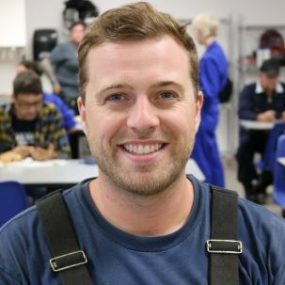 When Brandon started his career as a steamfitter three years ago, he never expected to find himself working with zebra mussels. “They clog up pipes kind of the way cholesterol clogs your arteries,” Brandon says of the invasive species commonly found on the bottom of ships. As a steamfitter, Brandon works on all pressurized systems: water, fuel, oils and steam. These are all skills needed at a steam generating plant like OPG’s Darlington Nuclear Generating Station. They are also skills required to figure out how best to safely mitigate zebra mussel pipe infestation.

Brandon was contracted by ES Fox a year ago to work on the zebra mussel mitigation project at Darlington during its $12.8 billion refurbishment project. “We put sodium hypochlorite in the cooling water we draw from the lake,” he says about the compound commonly used in water purification that also prevents the mussels from breeding in the pipes. “After the water goes through the lake water cooling system, it goes to the water treatment plant where the sodium hypochlorite is removed, so the water’s safe to go back into the lake.”

While working with zebra mussels was an unexpected turn in his career, for Brandon, it was a welcome one. “Not everyone gets to work at a nuclear power plant,” he says. “I’ve worked as a foreman and on natural gas rigs out west, but there’s a lot of big, impressive equipment here that you’ll just never get to see anywhere else.”