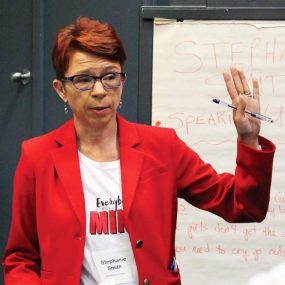 After 27 years working in the nuclear industry, Stephanie says she’s not going anywhere.
The Director of Operations and Maintenance at OPG’s Pickering Nuclear Generating Station says she’s still enjoying every minute of her job in the industry.

“Pickering is so unique because it’s so large, so I’m never bored,” said Stephanie. The nuclear station, which is scheduled to reach its end of service in 2024, continues to produce about 14 per cent of Ontario’s power and is running better now than it ever has. “I want to see this place through. It’s going to be challenging but rewarding.”

And that’s fitting, because Stephanie has made a career out of taking on big challenges and establishing many firsts for a woman in nuclear power.

She started at Darlington Nuclear in 1990 as a Graduate Engineer in Training and spent eight years working in engineering before moving to the chemistry lab at Pickering Nuclear. In 2006, she became the first female licensed shift manager at the plant. Then, in 2014, she became OPG’s first female maintenance manager, responsible for 800 maintenance staff and 200 contractors. And in 2016, she continued to make history by becoming OPG’s first female Director of Operations and Maintenance, overseeing all maintenance activity at the plant, from fuel handling to safety systems.

“Being the first woman in these important roles “showed other people that it could be done.”